In doing service for others, we often find answers to our own questions and solutions to our own problems.

When we feel bad, often our first instinct is to isolate ourselves and focus on what’s upsetting us. Sometimes we really do need some downtime, but many times the best way to get out of the blues quickly is to turn our attention to other people. In being of service to others, paradoxically, we often find answers to our own questions and solutions to our own problems. We also end up feeling more connected to the people around us, as well as empowered by the experience of helping someone.

When we reach out to people we can help, we confirm that we are not alone in our own need for support and inspiration, and we also remind ourselves that we are powerful and capable in certain ways. Even as our own problems or moods get the better of us sometimes, there is always someone else who can use our particular gifts and energy to help them out. They, in turn, remind us that we are not the only people in the world with difficulties or issues. We all struggle with the problems of life, and we all feel overwhelmed from time to time, but we can almost always find solace in service.

In the most ideal situation, the person we are helping sheds light on our own dilemma, sometimes with a direct piece of advice, and sometimes without saying anything at all. Sometimes just the act of getting our minds out of the obsessive mode of trying to figure out what to do about our own life does the trick. Many great inventors and artists have found that the inspiration they need to get to the next level in their work comes not when they’re working but when they’re walking around the block or doing dishes. We do ourselves and everyone else a great service when we take a break from our sorrows and extend ourselves to someone in need.

On December 28th I flew home to San Francisco after spending 11 days home in Quincy, Washington with my family. The following day I began radiation treatment. The following week, I found myself at the State Disability office. There had been a mistake on my paperwork that needed to be resolved. Ahead of me was a young man. He was asking the woman at the front desk many questions. I could tell he was confused and overwhelmed. For some reason I reached out to him. I offered to help him with his paperwork. The young man shared he had just returned from a 28 day stay at a rehab facility for drug addiction. His name was Jim. Jim shared he was a flight attendant as well as a nurse. He had been battling addiction to prescription drugs. He was very emotional, scared and overwhelmed. My heart went out to him since I am no stranger to addiction. I have been in recovery from alcohol addiction since 2002. I am now 12 years sober. I remembered how I felt when I was released from the rehab facility so many years ago. I not only shared my story, but I did my best to offer words of encouragement. Jim felt hopeless and I felt the need to encourage him not to give up. He was so grateful. Since that day, I text Jim words of encouragement once or twice a week and he does the same for me.

A couple of weeks ago I went downstairs. I had a few things I needed to buy at Safeway. As I approached Safeway I couldn’t help but notice a homeless man sitting with his dog. He looked sad and I sensed he felt hopeless. He had a sign that read “anything helps. God bless you”. I felt this pain in the pit of my stomach. The look on this mans face touched my heart so I walked up to him and said “I’m walking in to Safeway, is there anything I can get you?” He looked at me and much to my surprise he answered “I’d love a blueberry yogurt.” I couldn’t believe it. He could’ve asked for anything but instead all he asked for was a blueberry yogurt. As I walked in to the store I could feel a lump in my throat, not to mention, a tugging at my heart strings. My heart kept telling me not only to buy this man yogurt but I needed to give him money. I bought him 2 Greek blueberry yogurts and for some reason I asked for $20 cash back after I paid for my groceries. In addition to that, I asked the checker to give me the change as follows: one -$10, one – $5 and five – $1’s. I have no idea why but when I left the store I walked towards this homeless man. I handed him his yogurt and as I handed him the money I told him I didn’t know why but I felt the need to help him. He looked at me and reached out to me. He hugged me and said “God bless you”. I asked him what his name was. He answered “James”. James shared he had been homeless for the past 3 years after a streak of bad luck professionally but the good news was he had just qualified for housing. Unfortunately, the circumstances it took for him to be moved in to a home were less than stellar. He had been diagnosed with two types of cancer. My heart sank when he told me this and for some reason I began to cry. I told James I had never been inclined to give a homeless person more than a couple of dollars but something inside of me kept saying “you have to help this person”. I stood there crying and James reached out again and gave me a hug. He told me I was a good person and he knew God was going to bless me. I walked home that night praying for James asking God to bless him in a miraculous way. I haven’t seen James since that night but I find myself praying for him everyday. James touched my life that night in more ways I could have ever touched his. He reminded me not only to be grateful but to be compassionate toward others.

This morning I walked to the bank to withdraw the money from state disability that had been deposited in to an account the state had set up for me to receive my benefits. I withdrew the money to deposit in to my personal account so I can pay my bills. I’ve become a regular at Bank of America since becoming disabled with breast cancer nearly a year ago. The tellers have all been so wonderful and supportive as I’ve fought this nasty disease. One of the tellers even gave me a pin in the shape of a pink bow a few months ago. As I waited for the teller to withdraw my money, an employee was assisting a gentlemen. He was frustrated and the young female employee was doing her best to assist him. She walked away for a minute to do something and when she left the gentlemen looked at me and in frustration said he couldn’t take it anymore. I looked at him and said “things could be worse”. His reply was “I don’t think so. I just want to give up!” Earlier this morning I had seen the following quote on Twitter. 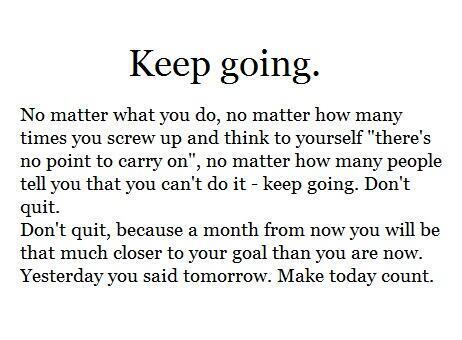 I liked it so much I saved it. I read it to this gentlemen and encouraged him not to give up. He told me he had given up on hope, God and people. He didn’t believe in anything anymore. He was now living in a shelter and didn’t know what to do. I said “don’t give up! Things will get better!” He looked at me with a defeated and discouraged look on his face and replied “I don’t think so”. I knew exactly how he felt. After all I’ve found myself rock bottom for the past two years. At that moment, the female employee had returned and was trying to assist him. I turned around to finish my transaction. When I was finished the gentleman was gone. The employees thanked me for my help. The female employee shared the man had left. I ran out the door and saw this man crossing the street. I chased him and when I caught up to him I handed him a $20 bill. He looked at me and said “no you don’t have to do that!” I replied “yes I do!” I put the bill in his pocket and said “I hope you will start believing again!” He was so humbled saying “thank you”. I reached out my hand to shake his while asking him for his name. I couldn’t believe it. His name was Jim. I told Jim to start believing and to remember there are good people in this world. He said “yes there are and you’re one of them”.

As I walked home I remembered a homily my priest had told us many years ago. He told the story of a homeless man who was sitting outside of a bank. Everyone who walked in and out of the bank ignored him and treated him like he was garbage. Only one person stopped to help him. As it turned out the homeless man was actually Jesus. The moral of my priests story was always help others in need. You never know when it might be Jesus. I never forgot that homily and have used that story as an inspiration to help others. Unfortunately, the past few years have been so challenging that I found myself forgetting to help others while busy thinking only of myself. Feeling sorry for myself and missing out on not only my blessings but the opportunity to bless others. The more I reflected on the events at the bank and Father Mario’s homily, I remembered Jim at the disability office, James the homeless guy in front of Safeway and Jim the hopeless, non believer at the bank, I realized in all three instances I had a tugging at my heart to help these people. All three men were down on their luck and all three men had something else in common, their name. While two of them referred to themselves as Jim they were all James. I wondered what this all meant. I opened up my bible to the book of James and the first thing I read was “James, a servant of God and the Lord Jesus Christ”. I went on to read the entire book of James but the chapter that really stood out to me was James 2 verses 1-7 & 14-16. I am attaching a link on this blog today. I hope you will take the time to click on the link and read chapter two. If you’re a believer you will understand why I find myself so touched as I write this. In my opinion, I’m not a saint, I’m just a girl who did the right thing and I feel good about it. You see, I didn’t change these men’s life in anyway, they actually changed mine. They reminded me that any time we have the opportunity to be compassionate towards others, we need to act on it because while we may be a blessing to the person in need, the real blessing comes to ourselves when we take the time to think of others and remember, you never know if the person you walk away from or choose to ignore is not just a homeless guy, rather he’s Jesus. And I don’t know about you, but I’d hate to miss out by walking away from the most high God just because he was down on his luck or homeless and receiving the greatest blessing of all.