I posted this on Facebook two years ago while fighting cancer. I thought I’d blog this story. I still think about Monroe. I wonder how he’s doing. I wonder if he’s on the beaches of Brazil. If you live in San Francisco and happen to be on 2nd and Townsend and run in to a shoe shine guy….take some time to let him shine your shoes. His stories will captivate you and his presence is sure to bless you.

Monroe Jackson!!! My new friend. He’s an African American older gentlemen who’s been a street shoe shiner for over 30 years. I met Monroe a few weeks ago after my first chemo treatment. I had seen him on the corner of 2nd & Townsend as I walked to my accupuncture appt. Accupuncture a must when you’re going through chemo. It really helps. Any way on the walk back home after my appt Monroe was away from his shoe shine post standing across the street at the corner of 2nd shooting the breeze w other people. We passed each other as I we crossed the street. I was walking slow that day. Very sick but by the time I got to Third street  I looked across the street and was surprised to see Monroe crossing the street heading towards me. I thought ” that’s weird. Am I seeing things?” As I crossed the street I took the time and asked. “Do you have a twin? I just saw you on Second street.” He laughed and said “no I just got off the bus”. Hmm weird. Chemo was Friday so Saturday I walked to accupuncture again. Monroe was at his post. We chit chatted and on the way home I decided to take time out to just talk to him. We briefly talked about many things. I shared I had cancer. Monroe said. “Girl….go shave that head!!! Bite the bullet and do it. Heck Sinead O’Connor did it. Grace Slick did it! Who cares!” I laughed but I did end up shaving my head. Yesterday on my way to my appt again I said hi to Monroe. He asked “so did you shave it?” I said ” yes”. He said. “Show me!” So I took off my hat. Monroe said “there you go. You’re perfect!” I laughed and for some reason Monroe decided to share his story. As it turns out, Monroe is a professional shoe shine guy. He’s not homeless. As a matter of fact, he has a home. He lives in the five bedroom home he grew up in with his five sisters. He’s 74 years old. He moved out at the age of 16. Unlike his sisters he never amounted to much more than being a shoe shine guy in the street. As he shared his story I realized he was dressed nice, very clean and I had the wrong impression. Monroe moved back home at the age of 50 when his mom got sick. She battled cancer. He took care of her until the day she died. Monroe said his mom was a “pain in the ass” always bitching about his girlfriends but he didn’t mind. He drove her around, fed her did everything a son should do. Monroe told me if there was one thing he’s learned in his 74 years of living is you can’t choose your parents or your family, they’re who you are and no matter what life throws at you fight hard, never give up and live life to the fullest. Monroe is hoping this will be his last year of shining shoes. He’s feeling a little old and he’s ready to pack it up and spend his last days on the beaches of Brazil. I hope he’s able to. Monroe is my blessing today. I’m always so grateful for the people I’m lucky enough to meet! 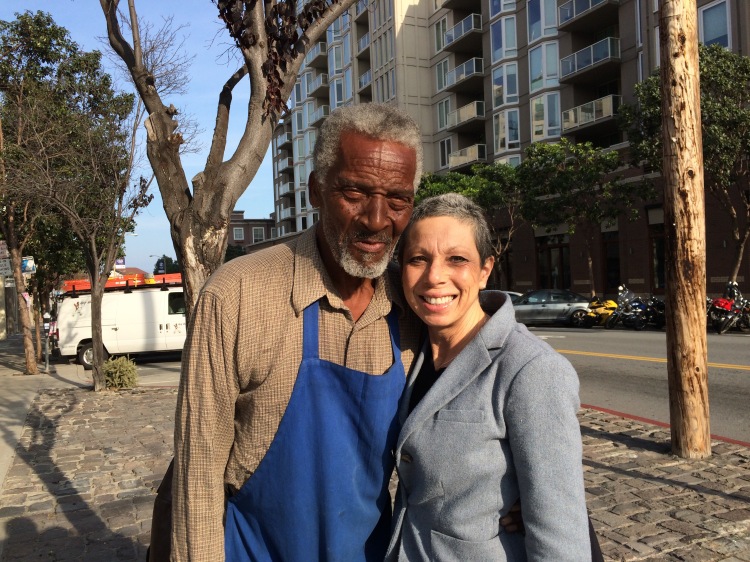